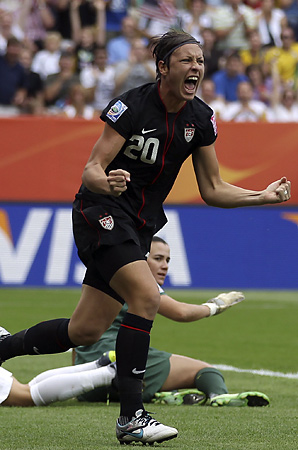 Let me start out this post by saying this…I may be the biggest soccer fan who’s actually never played a second of soccer in my life.  When I was younger I played football during what would be soccer season and just never got into playing the sport.  It wasn’t until the 1994 World Cup that I started watching soccer and started to gain an appreciation for the “Beautiful Game.”  Fast forward to yesterday and I’m a fan of the English Premier League, La Liga and follow international soccer a great deal.  Now I can’t say I watch much women’s soccer outside of every four years at the World Cup, but yesterday I found myself rooting as hard for the US women as I do for the men.  It was a big day for US soccer…one that will be remembered for years to come.

Being a fan of US Soccer isn’t an easy thing.  On the men’s side we’re an average side who occasionally pulls off big upsets, but also look like we have no idea what we’re doing (see: Gold Cup Final).  The amazing thing about soccer though is no matter how many disappointments you go through, or how many times you have to watch your team get stomped by Mexico on your home turf (MY EYES STILL BURN!) there are those moments that you’ll never forget.  The USMNT provided one of those moments last summer…

Just when you thought they were finished, when all hope seemed lost and another World Cup disappointment seemed imminent…something amazing happened.  A quick throw by Howard starts a rush and Landon Donovan scores one of the most important goals in US soccer history.  Whatever happened before that is forgotten and what you’re left with is pure joy.  Don’t remember?

Even if you don’t like soccer you have to FEEL that don’t you?  I was at a packed bar watching that game and the raw emotion was amazing.  I thought I would have to wait four years to feel something similar, but then the women pulled off their own miracle. 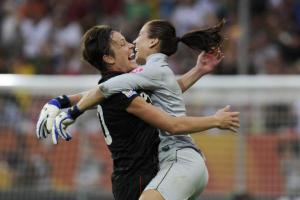 Let me set things up a bit for you.  The US Women’s National Team (who unlike the Men are actually one of the strongest sides in women’s soccer) were taking on Brazil, one of the three favorites to win the tournament (along with the US and Germany).  The US took a lead in the second minute on an own goal by Brazil, and were holding the Samba Queens at bay with a great defensive effort until Marta got a shaky penalty call in the 66′.  Along with the red card meaning the US would play a man down the rest of the match, the best player in the world would get a penalty kick to tie things up.  Standing in her way?  Hope Solo.  That’s when shit gets weird and intensely aggregating…

Yes, what you saw there was Solo SAVING the penalty kick and then being called for “being off her line” which she wasn’t AT ALL, and Marta getting a re-kick that would tie the game.  I was walking into the office just after this transpired and was greeted by another big soccer fan in the office lamenting about how US soccer was going to be screwed by the refs again in a big moment (this has happened to the Men’s team more than a few time in World Cups).  At this point it was on.  How DARE the refs screw us over!  There was nothing I wanted more at that moment then for an undermanned US team to stick it to the refs and Brazil and win the game anyway.

So the game goes to extra time with the US playing 10 on 11 soccer, and wouldn’t you know it, Brazil scores early in the first 15 minutes of extra time to make it 2-1….only the player who set up Marta for the goal was CLEARLY offside.  At this point it just looks like this game will go down in the annals of games where the Soccer Gods were clearly not with the US.  After a Brazil player feigned injury for 3 minutes late in the 2nd 15 minutes of extra time (she even got a yellow card for it) it seemed all hope was lost.  Three minutes of extra time was added for that joke of an injury, but with only a minute to go there was probably only time for ONE more US rush.  Then something amazing happened…again….

Abby Wambach buried a header after a PERFECT cross from Megan Rapinoe and all of a sudden that hand came out of the grave and grabbed Brazil just as they thought they were through to the semi-finals.  A lesser team would have just laid down and died after being screwed by the refs.  They could say that there was no way to overcome playing 10 vs. 11 for almost an hour.  Instead this team rose up and made a moment that soccer fans won’t soon forget.

With that tying goal in the back of the net it was time for a penalty shootout.  After Hope Solo made a save on of one Brazil’s chances, Ali Krieger had a shot to put the US through to the semi-finals….

And that was that.  The comeback was finished.  Justice had been served and the US is onto the semi-finals.  You may dislike soccer, but you can’t deny the courage and the grit it took for the USWNT to pull off what they did Sunday.  While Landon Donovan’s miracle in South Africa may have had a bigger impact on America becoming more of a soccer nation, Abby Wambach’s header has kept the movement going.  THIS is what makes soccer so great.  This is why we watch…

I love what I love and I am who I am. I'm a nerd. Don't like it? Oh well.
View all posts by Brad →
This entry was posted in soccer, sports and tagged abby wambach, brandi chastain, brazil, landon donovan, usa, uswnt, women's world cup 2011. Bookmark the permalink.