mitch albom wants you damn kids off his lawn 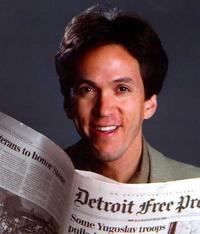 Let’s start this out by stating the obvious, Mitch Albom is a better writer than I am.  He has more writing talent on his worst day than I do on my best day.  He’s rich, influential (he’s friends with OPRAH! OMG!) and did I mention he was rich?  That being said Mitch has been known to mail a few columns in.  The man knows his audience, and apparently it’s comprised of old people who are scared at the technology used to run their toaster (WHY ARE THE DEMONS BURNING MY BREAD?!?!).  He writes some pretty awful stuff where you just KNOW he can’t really believe what he’s writing, but he knows it’ll appeal to his audience so he just writes it anyway.  This has been well documented before by the boys from Fire Joe Morgan, but since Mitch writes for my hometown paper, and since I just dislike it so much, I’m going to give his latest tech column the once over.

Mitch Albom: Apple Store like a land far, far away

Right from the headline I could tell I was going to be angry while reading this.  Did it stop me?  Sadly, no.  What can I say…I’m a masochist.

They say there are nine planets in the solar system. But that is not true. There is a 10th.

Actually since scientists have changed Pluto’s classification there are only 8 planets in the solar system.  Then again who needs facts right?  Oh….right.

I wish I could get paid to write about what I did on my day off.  Though I don’t know if you’d really want to read about me sitting in my pajamas and playing LA Noire on my Xbox….I mean…shit.

On this planet, no one has a job or anyplace to go. They simply drift all day in an endless swirl of new products, most of them white. You need no food, no water. You can stay there for years with your mouth hanging open.

Mitch realizes this is a store right?  Probably a small one at that since most Apple Stores outside of the one in San Francisco are in malls and therefore not that big.  Better not take him to a Best Buy or it will blow his fucking mind.

Some have gone and never returned, forgetting they have a family, a house or other clothes to wear.

THE APPLE STORE TAKES YOUR SOUL AND YOUR CHILDREN!  RUN FOR YOUR LIVES!!!

They spend the rest of their lives lifting a MacBook Air and yelling, “Feel how light this is!”

People do this?  I’ve been in an Apple store a lot and I’ve yet to see this.  Usually I just see a few hipsters trying out the Beats by Dre headphones while lamenting the music choices on the store iPods.

I am quite intimidated by Planet Apple Store.

But I was forced to go there last week when my Mac stopped working.

DAMN YOU TECHNOLOGY FOR FORCING ME TO GO TO A STORE WITH OTHER TECHNOLOGY!! This interrupted Mitch’s planned Saturday of sitting on his front porch reminiscing about the “good old days” while sipping on ginger ale.

I started it up, the little apple appeared, the little doohickey spun around, but then the screen went blue and froze.

Nothing ingratiates you with your old audience like calling normal computer processes funny words like “doohickey.”  Remember folks, this man make his living writing on a computer.  Pretty sure he’s not this stupid about them.

Naturally, I was embarrassed. I believed that Apple products never broke — and if they did, it was your fault.

SPOILER ALERT: it probably was your fault.  Maybe you jammed the thing-a-ma-bob in the wrong thing-a-ma-gig?

You were an idiot who did something mean to the nice white machine, you big clumsy oaf! What on Earth is wrong with you?

I pretty much ask myself this question every time I read one of these columns.

So I carried my Mac into Planet Apple Store, prepared to do what was expected, namely, drop to my knees and beg for mercy.

I would have loved to see this happen.  I’m sure the scene would have been something like this.

Apple Store customer (normal human being): What the fuck is Mitch Albom doing on his knees?

Apple Store employee (also normal human being): Said something about a doohickey on his computer…don’t make eye contact.

The mall in which this Planet Apple Store was located was virtually deserted.

Probably because it was in Michigan and we’re in a recession (being from Michigan it really pains me to make that joke).

It was midweek and midday and as I approached the big white apple sign, I had reason to be optimistic, because if you shot a cannon down the corridor you’d hit nothing but a Rosetta Stone kiosk.

So there was no one at the mall?  And you’re taking great pains to say this?  I bet the punchline is the Apple Store was packed right?

Wrong. Planet Apple Store was still as jammed as a Tokyo street crossing.

At least half the people wore blue shirts with an apple on the front. These were the employees whom Apple calls “Geniuses,” which, when compared with you and me, is an understatement.

Oh Mitch, hyperbole is so much fun.  Not everyone who works at the Apple Store is a “Genius,” that’s only the tech support guys.  Then again you’re describing this world to readers who are afraid a robot will come and steal their medicine so I suppose facts are meaningless.

One such Genius signed me in (on a handheld device, which I’m sure took my vital signs and spat out my SAT scores) and another summoned me to the Genius Bar, where the Geniuses presumably pour each other blue drinks like those “Star Wars” creatures, and where a redheaded female Genius with the tattoo of a something crawling up her arm looked me in the eye, smiled sweetly and said, “You pathetic imbecile.”

I don’t even know where to start with this sentence.  Since Mitch has a MacBook I’m willing to bet he has an iPhone and knows perfectly well what CRAZY handheld device the Apple employee had in his hand.  Then he goes in for the old person trifecta of Star Wars, tattoos and contempt for everyone.  THESE DAMN KIDS WITH THEIR STAR WARS AND NOT RESPECTING THEIR ELDERS!!  IN MY DAY WE DIDN’T GET TATTOOS UNLESS WE WENT TO WAR, AND THEN IT WAS DONE ON A SHIP DECK WHILE CROSSING THE PACIFIC!!

Does anyone REALLY believe Mitch Albom is this naive and stupid about technology?  Who reads this and enjoys it?  I WANT ANSWERS!

She didn’t say those words. That’s just how I felt.

Well if you are really as stupid as you portray yourself to be then she has a point in thinking you’re an imbecile.

Actually, once I told her what the problem was, she nodded pleasantly, gave a brief explanation of several possibilities and told me, “Don’t worry.” I felt like a man whose doctor looks at a troublesome X ray and says, “It’s nothing.”

Oh so she was polite?  You mean like a normal person?  AMAZING!

I wanted to kiss her sneakers.

KIDS THESE DAYS WEAR SNEAKERS….TO WORK!!  What has this world come to?  I would expect Mitch to write a column about how jeans and sneakers are destroying our society but George Will beat him to it.

A lesson in time

Then came the questions.

Genius: “Do you back up your data?”

Genius: “Do you have a Time Machine?”

Here’s where he plays stupid to the names of things you use with your Mac.  I can feel a lot of amazing comedy in our future.

Genius: “You may need to bring it in.”

I did not realize a Time Machine was a device Apple sold for data storage. I just figured the Geniuses had mastered time travel and assumed the rest of us dummies dropped by from the 17th Century.

HOOO BOY THAT JOKE WAS AWESOME!  Totally unexpected in the set-up.  I did NOT see that coming.  Wow, what a wacky scenario that happened randomly at the Apple Store.

“After we reload the Time Machine, we can add RAM, upgrade the graphics card, increase the memory, maybe click in a terabyte,” she said.

“Good, good, yeah, yeah,” I said, nodding as if I had the slightest clue what she was talking about.

Generally that’s what normal people would ask questions about.  What would you know about asking questions though.  You wrote the Fab Five book and failed to ask any questions about the piles of money falling out of Chris Webber’s pockets.  Did you believe him when he said it was just the money from his old time lemonade stand?

A friend reminded me to be grateful because at least she lived in this country and wasn’t talking to me over the phone.

She then wrote me a prescription, told me to drink lots of fluids and had me make an appointment with the nurse on the way out.

Urge to smash computer to stop having to read this rising….

As I write this, I still don’t have my Mac working. But that may be my own fault for not driving a time machine.

Mitch loves you so much that he’s somehow found an alternate means to write his column.  Probably a typewriter.  Chances he’s wearing a fedora with a piece of paper that says “PRESS” on it?  100%

On my way out of Planet Apple Store, the Geniuses stared with pity. So I grabbed a MacBook Air, held it high and said, “Feel how light this is!”

Hopefully at this point they threw him out of the store.  Please let that be the finish, because he has yet to make a “technology is out of date so quickly joke.”  WE CAN MAKE IT OUT OF THIS PEOPLE!!

Too late. It was already out of style.

I love what I love and I am who I am. I'm a nerd. Don't like it? Oh well.
View all posts by Brad →
This entry was posted in nerd stuff and tagged apple, awful writing, fjm deconstruction, mitch albom, snark. Bookmark the permalink.